Ethan Zuckerman was among the attendees at the recent TED Global conference in Tanzania -- he did some great blogging from there. Here's his overview/summary/reaction of the conference: Link.

And here's an excerpt from another recent post by Ethan which explores, among other things, the current Africa-themed issue of Vanity Fair:

In his video interview about the issue, [Vanity Fair guest editor] Bono tells us what these twenty people had in common: “They’re passionate about Africa.” And most of them have highly recognizable faces, which never hurts when you’re trying to sell a glossy magazine to society matrons in Iowa. As Bono says, he was trying to “bring some sex appeal to wanting to change the world.” Well, Somali supermodel Iman helps with her attempts to climb out of her dress. And I do suspect that it would have been interesting to listen in on some of the conversations “depicted” on the cover - what do Chris Rock and Warren Buffett say to each other at a joint photo shoot anyway?

The message of the cover is that Africa is important and sexy because important and sexy people care about it and are willing to lend their “talent” and celebrity appeal to the “cause”. This tends to piss off my friends who are begging the world to think of Africa less as a cause and more as a continent, particularly as a continent open for business. How hard would it have been for Vanity Fair to pair some of these well-meaning celebrities with actual Africans working to build businesses, repair hospitals and save forests? Put Corniele Ewango on the cover and let Brad Pitt look up to him, an actual superhero, someone who has risked his life numerous times to preserve the forests of the eastern DRC. Put Madonna on the cover with William Kamkwamba, the remarkable Malawian youth who built a windmill to power his family’s house. (Wait, scratch that - she’d probably adopt him.) 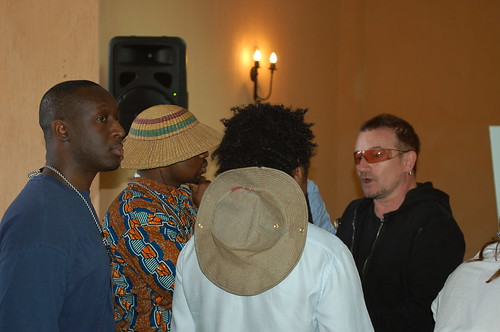 Or throw this photo on the cover - here’s Bono talking to some of the young entrepreneurs that George Ayittey terms “the Cheetah Generation”. In the straw hat and badass shirt is Eric Osiakwan, one of the very fastest of the cheetahs, a young innovator who’s worked extremely hard to ensure that the submarine cables that connect the African internet to the North will actually bring down the cost of connectivity on the continent. Vanity Fair isn’t going to make Condoleeza Rice any more famous, but it would probably help Eric get more attention for his work.

But that’s not the point of the issue, as the table of contents makes clear. Genocide in Darfur, AIDS in Rwanda, Jeff Sachs’s attempt to raise $200 billion to transform villages, Madonna in Malawi. The only story in the online table of contents remotely connected to entrepreneurship is a slideshow about the airlines that serve as transport infrastructure for the DRC. It’s possible - and quite likely - that some of these stories are excellent and worth reading. But the overall picture is the one that so many Africans find themselves fighting - Africa as basket case.

More post-TED posts on Africa include Mental Acrobatics: Link ("Why TED Global Rocked"), and White African's overview of African bloggers at the conference: Link. (Thanks, Emeka! Photo by White African. )