Nepali "Living Goddess" is rather into gadgets

Nepali "Living Goddess" is rather into gadgets 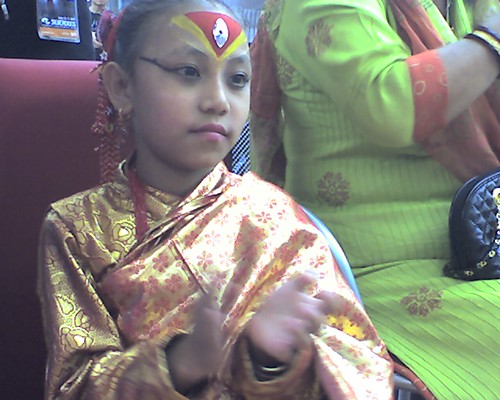 This weekend, a living goddess paid a visit to the DC area. She's the Kumari of Bhaktapur, Nepal, one of a small group of girls worshipped as living deities in the Himalayan kingdom. Selected at a young age, Kumaris fulfil this spiritual role until they hit puberty, at which point they retired as goddesses and are replaced by another toddler.

The most famous Kumari, the Kumari of Kathmandu, is generally sequestered in a small palace, and she's not allowed to touch the ground when she leaves the building. In contrast, the Bhaktapur Kumari, Sajani Shakya, is allowed to live with her parents and attend school, despite the fact that the faithful are known to drop to her feet to pay their respects. This is the first time a Kumari has visited the US.

The Kumari was in town for the Silverdocs festival for the world premiere of a documentary about Kumaris. While she was here I managed to shot a short video and some pics on my phone. It turns out she's a gadget geek - as you'll see in the pics, when she wasn't holding court, she was snapping pics with her digital SLR and an HDV camcorder.