(Photos: crowd above, security chart below, by eecue of blogging.la, more here, cc-licensed).

I've been posting Coachella notes (one, two) to BoingBoing between band sets, from inside my buddy Wayne's biodiesel tour bus.

I hear there are several temporary cell towers on-site while the event lasts, to keep the voice, data, and SMS service moving. So unlike other desert events (say, Burning Man), phones are everywhere at Coachella, in-hand.

People walk while txting, wandering from stage to stage with eyes fixed on display. Fans hold them up during night performances, to snap photos or video or pay tribute by beaming display-light back at the band.

Stepping between tight rows of cross-legged attendees, waiting for one act to go on, I smell weed. I glance down, looking for the source glow. But all I can make out are luminous Sidekicks, fingers punching out txts, blotting out glow in staccato code.

We watched one superstar techno headliner play earlier tonight, to a packed field under black sky.

When the music ended and those tens of thousands of fans exited, a chorus of crinkly, plasticky sound rose from beneath all those feet.

"Raver cruft," said Wayne. "That's what we used to call this smushed-up trash carpet back in the day."

Hard to remember to pick up your junk when you're rolling on all that E.

Coachella organizers came up with a crafty way to encourage attendees to help recycle, though, and it does minimize the mess: Turn in 10 empty watter bottles, get a cold, fresh bottle of water, free.

Peel away the art, the crowds, the stages, the taco and t-shirt vendors, pull up the turf -- and you got desert here. Beyond Coachella the event, the same is true in the greater Coachella Valley. Virtual reality, as long as the water lasts. Suburban lawns where only a creosote shrub might have managed to choke out a living before.

(Photo: Questlove of The Roots, performing Sunday at Coachella. Shot by eecue, cc-licensed).

Old date palm plantations are disappearing, giving way to new housing developments. The wild desert still pops up here and there, a cactus peeking out between planned, rectagonal community plots.

But the unplanned community plots are what make events like Coachella fun. Late last night, we wandered into the parking lot where all the artists and vendors camp. Hobo land, some were calling it.

One guy was scavenging scrap wood to ignite in a burn barrel. "Burn first, ask questions later!" someone whispered at him. Someone else deejayed, dozens danced, others did somersaults and stiltwalking.

A guy from Reno named Chris, whose card I lost, set up this wild infrared light projection system on a sheet, with software he'd written -- people dance in front of the infrared lamp, some kind of crazy command-line magic happens, and their moving silhouettes end up projected on that flat sheet, with retro video trail effects lagging behind the outlines. Imagine an iPod TV ad mashed up with the sfx from a 1972 Deep Purple video.

Then, that robot showed up again, trash talking and trying to pick up all the chicks. 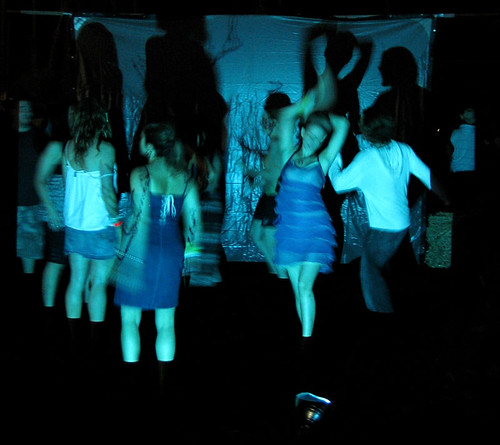 (Photo above: Dancing with the infrared video display thing at "Hobo Land," in the small hours between days. Shot by Xeni, cc-licensed).