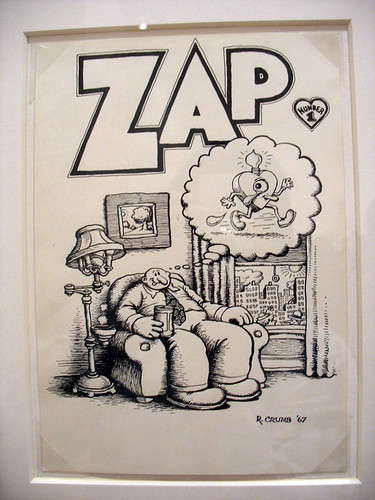 A massive Robert Crumb retrospective curated by Todd Hignite just opened at the Yerba Buena Center for the Arts in San Francisco. It runs from Mar 16 - Jul 8, 2007.

The show includes over 200 of the best examples of Crumb's art, spanning his prolific and rich lifetime body of work.

I just posted a Flickr set of 81 photos taken on the opening day. It's a good thing we shot the photos early, as the opening drew more visitors than anyone at the museum could remember ever getting, There was a 30-45 minute wait for the line of people just to get into the show later in the night. Also spotted but not pictured: Paul Mavrides, Gary Baseman, S. Clay Wilson, John Dwyer, Terry Zwigoff, Caitlin Mitchell-Dayton, Eric Sack, Robert Armstrong, various McSweeney's staff and of course many others...

I usually don't enjoy art openings that much because it is so hard to look at the work. This was a nice and unexpected exception as YBCA was smart to limit the number of visitors into the large exhibition space to a comfortable number, while a line waited to be let in as people left.

I'm already planning to go back for a revisit to take the audio tour. I have never taken one of these, as typically I'd have no interest in hearing some scholar telling me what to look at. In this case it sounds interesting as the audio tour features commentary on several pieces in the show by the artist and his wife that were excerpted from an interview by Todd Hignite on his recent trip to their home in France. This sounds strange to me, but to take the tour you have to call a number on your mobile phone and as you walk through the gallery you can punch in a number assigned to the piece you are looking at to hear their words. I plan on bringing some headphones so I don't feel like I'm on the phone in the museum.