This collection is our third collaboration with the remarkable Joseph Mills. An artist of unique vision and exceptional skill, Mills is influenced in particular by the Dada and Surrealist movements, and by his personal experience of psychosis. He describes his earliest artistic accomplishment as “simply surviving through creativity.” Starting out as a photographer, a snow-induced confinement indoors kicked off a second creative practice: collage. Now, 35 years later, these two ostensibly different bodies of work continue along simultaneously parallel and overlapping paths. Our first monograph, Inner City, features Mills’s street photography while the second, The Loves of the Poets, is devoted to collage. In this gorgeous new book we present silk-screened images, a medium relatively new to Mills but one he deploys with his own inimitable genius. Anarch is fascinating, beautiful and truly unique. Joseph Mills has lived and worked in Washington, DC for many years. His work has been widely exhibited and can be found in numerous private and museum collections.

Hope you're summer's gone well & that you continue to live in serenity &
grace.
I'm writing you from the home of my friend Jean Switzler. We've visited
your website because I wanted to show her your grandmother's beautiful
photographs of the valley/Neversink River etc. Jean is the town historian
& is very much interested in seeing them.
Could you possibly direct me to where they are on your site? I couldn't
find them, alas.
Thank you!

Please forgive my delay in contacting you after relocation from Kim's
homestad -- it's been a terrifically bumpy year.
Hoping to hear from you,

May Isabel Medina Govin Cards - May Isabel Medina Govin -Was born in l870 in New York City. Her Mother was Mary Purdy (later called May or Bunny in the family) and her father was Federico Medina - a Spanish nobleman and gambler, much disliked by her grandfather, a distinguished inhabitant of Staten Island, New York. He was a part owner of a renowned racehorse named Eclipse who won the Kentucky Derby. Mary Purdy eloped with the Spaniard who later became a gambler and a drinker. I met a Spanish Count once who told me that he thought we were related as he had had a relative with the same name who later committed suicide over gambling debts. In any case, Mothermay (as we called her) was raised in a very European environment - her Mother was musical and knew many singers (Sarah Bernhardt) and musicians of her time, especially in Madrid and Paris

© May Isabel Medina Govin 1920's - 1930's - Mothermay married late at age 30. She told me she could not make up her mind. But eventually, in the largest Catholic Cathedral in New York she married Rafael Govin. He was an international lawyer, partner of J, P.Morgan and owner of sugar plantations and newspapers (The Havana Post and elMundo) in Havana, Cuba. He also owned the International Color Printing Company in Wilkes-Barre, Pa. and the
Elmira Star Gazette among other things. He became a friend of King Alfonso of Spain who shared his love and interest in newspapers. Mothermay loved to gamble (her father?) It was fun to go to Jai-lai games with her in Florida - she almost always won. And at horse races she invariably could pick winners - sometimes by the way the horses looked, or the name of the jockey or the sire. Grandfather Govin would take Mothermay to Monte Carlo 3 times a year for gambling. According to Helen. She broke the bank 3 times! They lived a very
International life with a houses in Havana and Madrid, a mansion on
Massachusetts Avenue in Washington (just opposite the Greek Embassy) an Apartment in New York, and seasonal stays at the Grand Hotel in Monte Carlo, and other hotels in Paris, Aix-en-Provence and other "watering spots" around Europe. Tragically, Grandfather Govin died of a heart attack during a stay in Monte Carlo. He was only 59 and at the height of his career. as a lawyer, he did not believe in wills, so he died intestate. What could be recovered - and a lot was and a lot was not. As is evident from these cards, she liked
luxurious, hand-made things as did her wealthy contemporaries of the time. But she was generous to a fault, a loving and doting Grandmother, represented a way of life that disappeared three generations ago. There are still plenty of rich people but I think the taste, the grace has mostly left the modern world.

We turn now to another recording from “The Execution Tapes.” Alpha Otis O'Daniel Stephens was killed by electrocution on December 12, 1984. His was a so-called “botched execution” because it took more than one attempt to take his life. Stephens remained alive after the initial two-minute jolt to his body. He was electrocuted again after doctors pronounced him still alive following a six-minute pause. The total execution took more than twenty minutes. The recording is made from inside the death chamber. Again, listen carefully.

That was a recording from the execution of Alpha Otis O'Daniel Stephens. The execution actually lasted more than twenty minutes. To hear the full recordings from “The Execution Tapes”, go to Dave Isay's website at SoundPortraits.org

GOP Senator David Vitter Refuses to Resign Over Prostitution Scandal
And in Washington Republican Senator David Vitter of Louisiana has announced he will not resign even though he admitted making telephone calls to an alleged prostitution ring in Washington. Vitter said the incident was "a very serious sin in my past for which I am, of course, completely responsible." Vitter is a first-term senator who also serves as Southern regional chair for Republican Rudolph Giuliani's presidential campaign. Vitter became a Congressman in 1999 replacing Republican Bob Livingston who resigned after an adultery scandal. At the time Vitter praised Livingstone's decision and he called on President Bill Clinton to do the same because of the Monica Lewinsky scandal. Vitter said: “I think Livingston’s stepping down makes a very powerful argument that Clinton should resign as well and move beyond this mess."

From  - The Art of Amy Crehore

I'm working on some very special paintings for a very special show at a very special gallery called Corey Helford Gallery in Culver City, CA. The show is called "Literartistry" and about 50 artists (including my favorite fine art photogapher, Chris Anthony) will be doing interpretations of their favorite books. I am doing the novel "Lolita" by Nabokov in two parts. I will write more about this show very soon. And the first "Tickler" ukulele should be unveiled by the end of the week. I still have to have photos taken and tweak it a bit. It's interesting just how much a luthier's craft is like that of a fine jeweler. Plus, the added dimension of making sure that the instrument is quite playable and sounds good. It was not an easy thing to paint with oils either. I'm very happy with the results and I hope you will like it, too

written and edited by Nancy Scola. Spark features the latest in progressive political news, commentary, and regular features, with contributions from Air America's stable of hosts. Below you will find a sample blog post from Spark. To read the latest Spark visit AirAmerica.com.

Break out the cots because the big news on Capitol Hill is that Majority Leader Harry Reid is planning to keep the Senate in session all night long tonight. The move is intended to highlight the fact that Republicans won't allow a pure up-or-down vote on the Levin-Reed Amendment concerning troop reduction in Iraq. More on the amendment in a minute, but on the procedural end, you might hear this talked about as a filibuster-type move. It's not.

Republicans have made plain the fact that they will not allow the Senate to hold a regular ol' vote on the measure because it currently has enough votes to pass the Senate. (What I'm hearing is that it has 52 votes in favor -- every Democratic vote, plus Senators Sanders (I-VT), Snowe (I-ME), Hagel (R-NE) and Smith (R-OR). To break a Republican filibuster, the bill needs 60 votes, and it doesn't have it as of yet. What Reid is pushing for is a straight yea-or-nay/majority rules vote on the amendment.

Reid, using his powers as Majority Leader, will keep in Senate in session overnight tonight for a total of 30 hours. Why 30? Because Senate rules provide for 30 hours of debate once the Senate demonstrates that it wants to keep debating. As Bob Geiger puts it: "In other words, the Majority Leader is saying [to Republicans] 'You want to debate? We'll stay all night and debate.'"

Back to the policy itself. The Levin-Reed amendment (S.AMDT.2011) is an add-on to the Department of Defense authorization bill and what it does is require that George Bush do two main things. First, begin reducing the number of troops in Iraq within 120 days of passage. And second, ensure that most troops are out of Iraq by April 30, 2008.

We'll (hopefully) have more on the Senate move later today from the Young Turk's Cenk Uygur who has been following this for a while now.

the stereotype of Africa as a black hole of disease and death. News reports constantly focus on the continent's corrupt leaders, warlords, "tribal" conflicts, child laborers, and women disfigured by abuse and genital mutilation 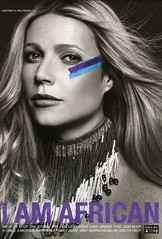 Columbia's Uzondinma Iweala -- author of Beast of No Nation on child soldiers -- argues in the Washington Post today that the West needs to move past seeing itself as the savior of a dark and despondent African, stop trying to cleanse its soul of its misdeeds by redeeming what it sees as a poor and struggling continent. Among the more misguided attempts of the western world to identify with and thus rescue Africa, writes Iweala, is a campaign that you might have seen in magazines and on bus stop shelters -- Keep a Child Alive's "I am African" campaign that featured the likes of Gwyneth Paltrow and Elijah "Frodo" Wood marked up to look like some technicolor cartoon version of "African." Says Iweala:

In his second day of testimony at the Family Secrets trial, key witness Nicholas Calabrese said he took part in bombings of businesses with his brother, Frank Calabrese Sr., and ran "juice" loan operations on his behalf.

Nicholas Calabrese, who is expected to testify about his involvement in more than a dozen mob-related slayings, said he was never told why the Outfit wanted some of the businesses bombed.

no memory of ever telling anyone that record producer Phil Spector should "fry" for killing the actress.

The woman who called Lana Clarkson her best friend completed her testimony today by saying she had no memory of ever telling anyone that record producer Phil Spector should "fry" for killing the actress.

Punkin Laughlin, a club promoter also known as Punkin Pie, finished her third day on the stand in the Spector murder trial. She was the latest in a string of defense witnesses who testified that Clarkson was depressed about financial woes, her lack of career prospects and a recent failed romantic relationship.