Chris,
I'm Ann (.................) from livejournal.
I've been on your site for hours now.
I told you this once before, years ago infact - when I was in the middle of my drug hell - that I loved the photo of your friend, Marc Peters in the snow. I still love it.
You have no idea how comforting and challenging your site was for me when I used drugs and ultimately when I made the decision to quit them.
I am just over four years clean now and I love sobriety. I try to look at the time I spent on drugs as character building and the reason I am as strong as I am today. I also remind myself to remember humility and never take for granted the fact I am clean. I know it's a lifetime commitment.
Thank God for people like you in the world, man.
Your photos humanize addicts and remind us that junkies, hustlers, homeless, hookers, are all still human beings who laugh, cry and love.
Bravo. Seriously. :)
Regards,
Ann
P.S. Do you sell copies of your photos? Nadia Frey's portrait is one that shouts of the pages at me and all I can say is 'wow'.

BAHAI, Chad -- Here, at this refugee camp on the border of Sudan, nothing separates us from Darfur but a small stretch of desert and a line on a map. All the same, it's a line I can't cross. As a representative of the United Nations High Commissioner for Refugees, I have traveled into Darfur before, and I had hoped to return. But the UNHCR has told me that this camp, Oure Cassoni, is as close as I can get.

Investigative reporter Seymour Hersh joins us to talk about his explosive new article in the New Yorker Magazine. Hersh reports that John Negroponte’s decision to resign as National Intelligence Director was made in part because of the Bush administration’s covert actions including the indirect funding of radical Sunni groups - some with ties to al-Qaeda - to counter Shiite groups backed by Iran. Hersh also reports the Pentagon has established a special planning group to plan a bombing attack on Iran and U.S. military and special-operations teams have already crossed the border into Iran in pursuit of Iranian operatives. [includes rush transcript - partial]

John Negroponte was sworn in to his new position as Deputy Secretary of State on Tuesday at a ceremony attended by President Bush. Negroponte resigned from his post as National Intelligence Director in early January. His career includes stints as Ambassador to Iraq after the US invasion and ambassador to Honduras, where he was accused of overseeing the arming of Nicaraguan rebels during the Iran-Contra scandal of the 1980s.

In an explosive new article, the New Yorker Magazine reports that Negroponte’s decision to resign as National Intelligence Director was made in part because of the Bush administration’s covert actions in the Middle East, which so closely echo Iran-Contra. According to investigative reporter Seymour Hersh, the Bush administration, with Saudi Arabia, is secretly funding radical Sunni groups - some with ties to al-Qaeda - to counter Shiite groups backed by Iran. Moreover, this is being done without any Congressional authority or oversight.

Hersh also reports the Pentagon has established a special planning group within the office of the Joint Chiefs of Staff to plan a bombing attack on Iran. The new panel has been charged with developing a plan that could be implemented within 24 hours of getting the go-ahead from President Bush. Hersh also reveals that U.S. military and special-operations teams have already crossed the border into Iran in pursuit of Iranian operatives. Seymour Hersh joins me now from Washington DC.

AMY GOODMAN: It’s nice to have you back from Egypt.

Jurors deliberating in the perjury trial of I. Lewis "Scooter" Libby asked for the judge's advice about how to interpret one of five counts in the case. The count charges that the vice president's former chief of staff lied to the FBI about his conversation with former Time magazine reporter Matt Cooper, according to a note from the jury released by the court this morning.

But even before the judge was able to advise them, the jurors said they had resolved the matter themselves.

* Keeping in the theme, please wear brown and/or green attire to the Opening

Lockwasher... Rayguns (Intergalactic Self-Defense Mechanisms). "... I started putting these intergalactic self-defense mechanisms (ray guns) together after being totally inspired by Clayton Bailey, artist/gunsmith. I also draw inspiration from old 50's and 60's space movies/TV/toys...anything retro cool! I hope you enjoy looking at these as much as I did creating them." From Lockwasher's Photos at Flickr. More at Lockwasher Design. 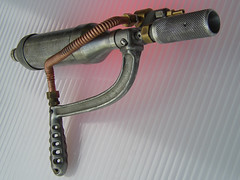 Carte-de-visite portrait of Dr. Henry Parker Sartwell (1792-1867), American botanist. Studying botany for almost 50 years, Sartwell devoted his attention to the Carex genus starting in 1846, attempting to amass a collection of every known Carex species in North America. The herbarium he created, containing about 8,000 species, now resides at Hamilton College in New York. Handwritten inscription at the bottom of the image field reads, "Dr. H.P. Sartwell, 1865."

From Portraits of Scientists: Increase Lapham's Cartes-de-visites Collection. "...A self-educated engineer and naturalist, Increase Lapham was Wisconsin's first scientist and one of the state's foremost citizens. He wrote the first book published in Wisconsin; made the first accurate map of the state; investigated Wisconsin's effigy mounds, native trees and grasses, climactic patterns, and geology; and helped found many of the schools, colleges and other cultural institutions, including the Wisconsin Historical Society, that still enrich the state today.

New Orleans Journal
Daily dispatches from the Crescent City.
by Dan Baum
PLUS: An audio slide show with Robert Polidori, and our New Orleans folder.

God was missing for six days.  Eventually, Michael, the archangel, found
him, resting on the seventh day.

He inquired of God  "Where have you been?"

God sighed a deep sigh of satisfaction, and proudly pointed downwards
through the clouds, "Look, Michael. Look what I've made."

Archangel Michael looked puzzled, and said, "What is it?"

"It's a planet," replied God, "and I've put Life on it.  I'm going to
call it Earth and it's going to be a great place of balance."

God explained, pointing to different parts of earth.  "For example,
northern Europe will be a place of great opportunity and wealth, while
southern Europe is going to be poor.

Over there I've placed a continent of white people, and over there is a
continent of black people.  Balance in all things," God continued
pointing to different countries. "This one will be extremely hot, while
this one will be very cold and covered in ice."

The Archangel, impressed by God's work, then pointed to a land area and
said, "What's that one?"

"Ah," said God  "That's Washington State, the most glorious place on
earth. There are beautiful mountains, rivers and streams, lakes,
forests, hills, and plains. The people from Washington State are going to
be handsome, modest, intelligent, and humorous, and they are going to be
found traveling the world. They will be extremely sociable, hardworking,
high achieving, and they will be known throughout the world as
diplomats, and carriers of peace."

Michael gasped in wonder and admiration, but then asked, "But what about
balance, God?  You said there would be balance."

God smiled, "There is another Washington.  Wait till you see the idiots
I put there.